First off, let me tell you, my younger self would squirm with disgust at the sight and taste of parsley. Being Italian, my dad would use fresh parsley from his garden in most dishes he made. I would always beg him to switch it out for basil or to leave it off of my dish. Now, years later, my love for basil hasn’t changed, but I actually love parsley too. I find myself adding it to a lot of dishes as well and laugh at the memory of complaining when it was in my food.

Therefore, in this spaghetti aglio e olio recipe, I add in a handful of chopped parsley. That isn’t the only ingredient I add that isn’t olive oil or garlic, but I also like a spicy kick to my meals. I either have fried hot peppers on the side to enjoy or add pepper directly into the recipe for added heat. In this recipe, I add in a few slices of hot pepper to fry in the garlic and oil. A few slices of hot pepper or a pinch of hot pepper flakes is all you need as frying in the olive oil intensifies the heat.

Most importantly would be to use a very good extra virgin olive oil. You do not want to skimp on any olive oil in this recipe since it is one of the two main ingredients. I had seen this bottle of Sicilian green gold olive oil and thought it looked great so I wanted to try it. Turns out it tastes great and I would recommend using it! Also, instead of draining the pasta and getting rid of that precious pasta water, I would recommend getting a set of kitchen tongs or tweezers to pick your pasta directly from the pot into the frying pan. That being said, lets begin! 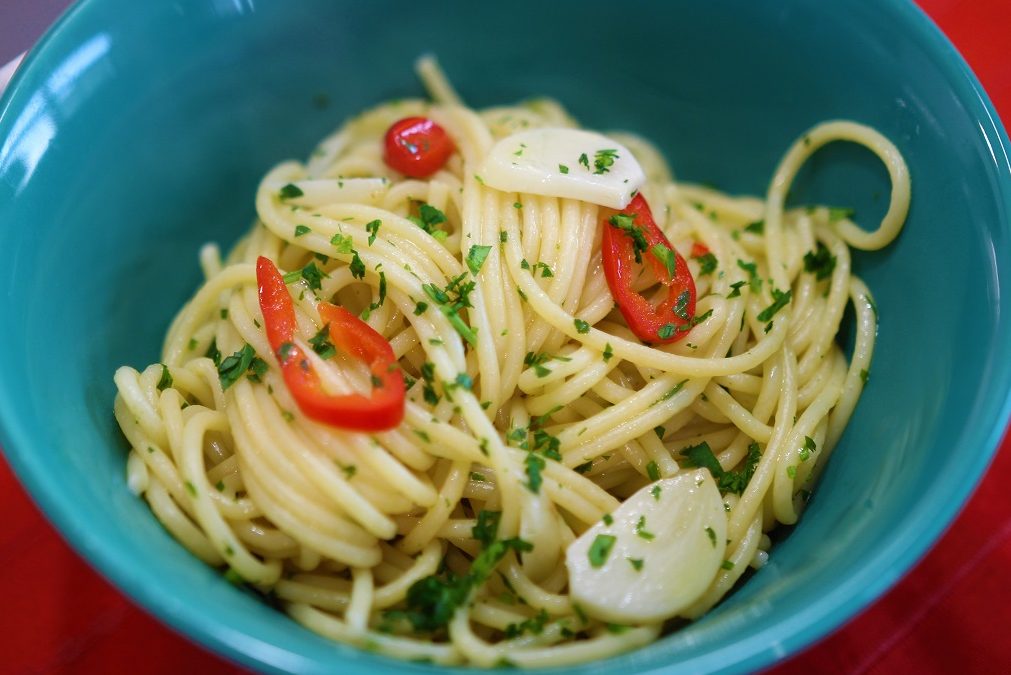 This Spaghetti Aglio e Olio follow the more traditional version of the recipe, but with a few added ingredients to amplify the flavor of the dish!
Servings 2
Prep Time 5 mins
Cook Time 15 mins
Total Time 20 mins